Osiris Media announces the premiere of Salute the Songbird, a new podcast hosted by rock and soul singer Maggie Rose. The first episode drops today, with Grammy-nominated songwriter Ruby Amanfu. Salute the Songbird is the latest addition to Osiris Artist Spotlight podcasts, and was developed in partnership with Rose and her manager, Austin Marshall of Starstruck Entertainment. 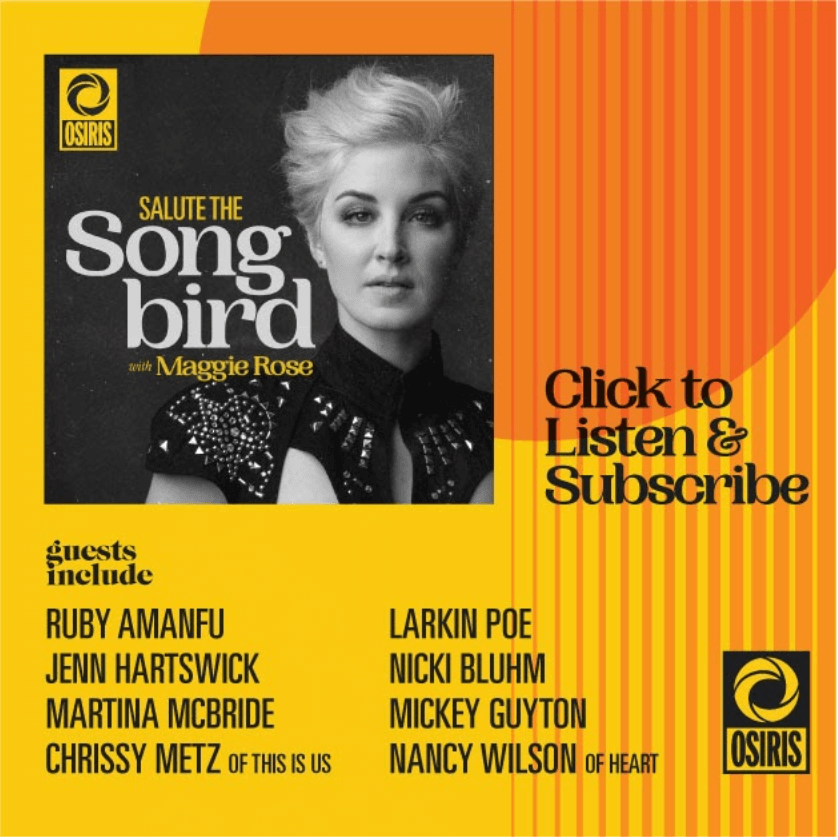 Salute the Songbird features candid conversations with Rose’s female musical heroes about their lives in and out of music, challenging the status quo, and with a desire to offer guidance for young artists starting their careers. The podcast will feature guests such as Grammy nominee Mickey Guyton, singer-songwriter Nicki Bluhm, Heart’s Nancy Wilson, Martina McBride, Chrissy Metz from This Is Us and other female musicians, songwriters, producers, and industry mavens who detail their triumphs, struggles and how they continue to succeed as women in the music industry.

“We are thrilled to start 2021 by welcoming our first Artist Spotlight show led by a female artist,” said RJ Bee, CEO of Osiris Media. “Maggie hosts real, raw conversations with some of the leading female musicians of our time. We’re grateful to be able to provide a platform for Maggie to talk about the obstacles and opportunities associated with being a great female artist.”

Grammy-nominated songwriter Ruby Amanfu joins Rose on the first episode of Salute the Songbird to talk about her career, the wide spectrum of musical influences that thread through her work, writing through the difficulty of the pandemic and the issues that arose in 2020. Amanfu tells Rose about allowing herself to take a creative break until she finally felt compelled to write about what was going on, how being an immigrant has contributed to her fearlessness, and learning to be her true self no matter what.

At the end of the episode, you’ll hear Amanfu’s track “When We Were Kids.”

Amanfu is a Ghana-born, Nashville-based vocalist and songwriter. Her accolades include co-writing the Top 40 radio single, “Hard Place” by multi-Grammy-winning artist H.E.R. Ruby garnered an Associated Press #1 Album of the Year with her former duo Sam & Ruby as well as Grammy recognition for her song, “Heaven’s My Home” co-written with Katie Herzig. Ruby has released 9 critically acclaimed solo albums including “Smoke & Honey” released via Polydor UK and “Standing Still” released via Thirty Tigers and Rival & Co. which featured the single, “Shadow on the Wall”, written by Brandi Carlile and Tim Hanseroth.